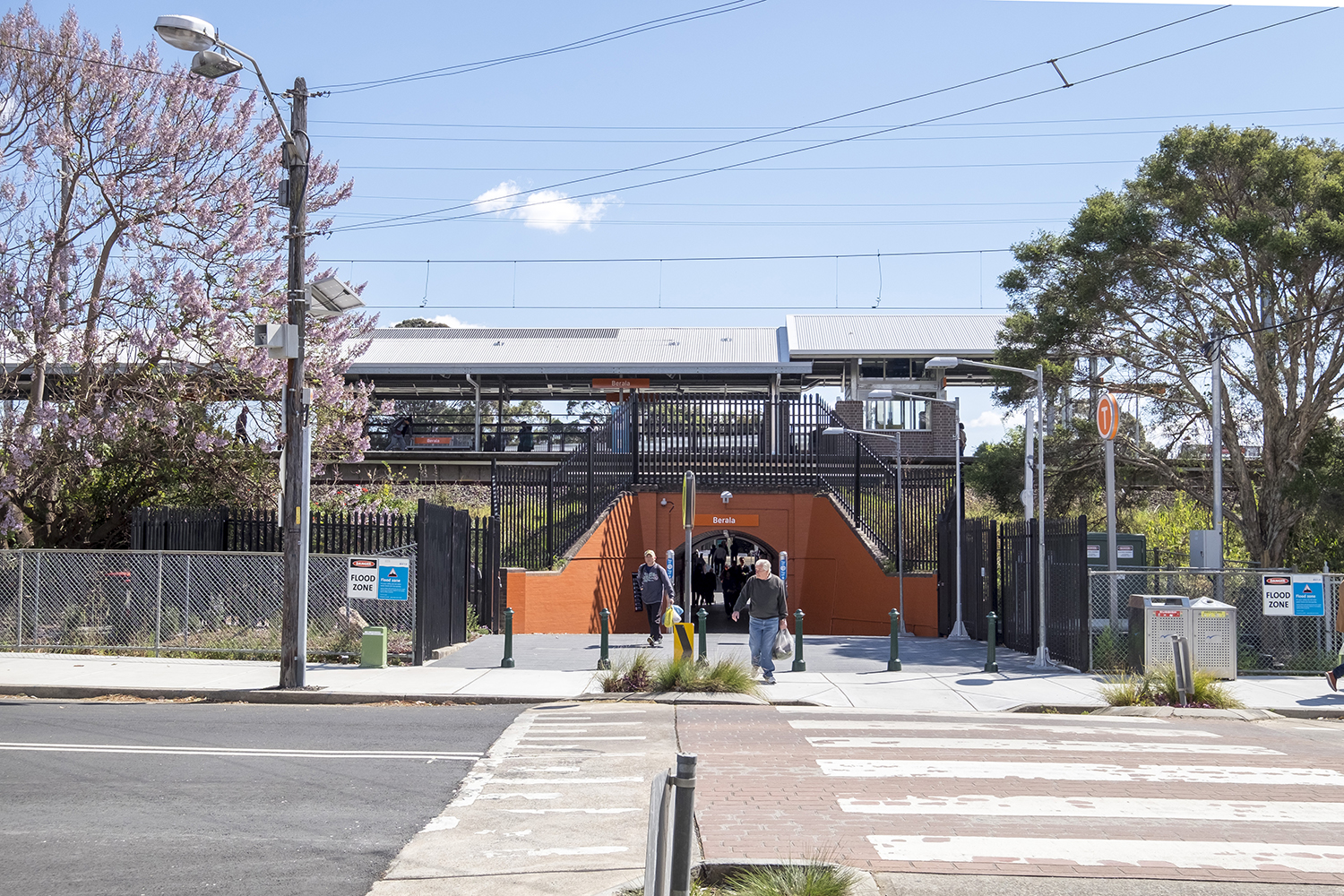 Over the last two decades DesignInc has designed the upgrades of many transport stations as part of the Transport for NSW’s ongoing programs for improving accessibility. Most recently completed, Berala railway station now has elevator access as part of a heritage-sympathetic intervention.

Like many old NSW train stations, Berala railway station, which opened in 1924, did not meet key requirements of the Disability Standards for Accessible Public Transport or the Commonwealth Disability Discrimination Act 1992. The island platform could only be accessed by stairs from the underpass, which made it a difficult undertaking for people with reduced mobility or parents/carers with prams. 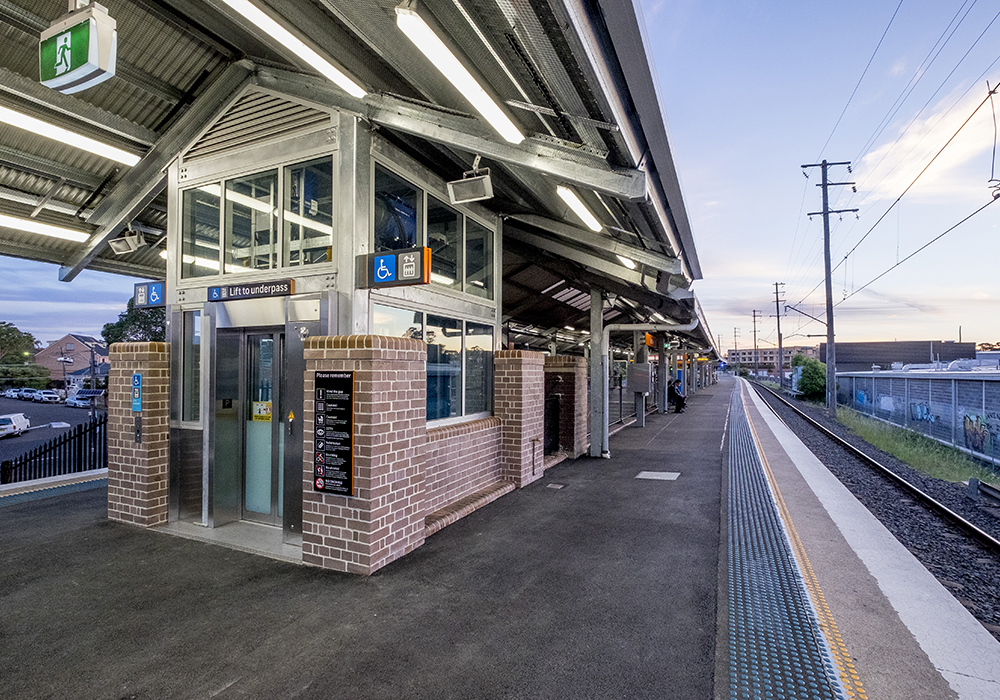 Transport for NSW engaged DesignInc for the upgrade of the station in order to provide safe and equitable access to the platform and improved staff and customer facilities, while respecting the heritage character of the station.

Berala railway station is entered via a vaulted brick underpass from the forecourts at Campbell and Woodburn streets. Upgrades to these entrances included resurfacing the pavement and rerouting the fence at the Campbell Street forecourt to bring a commemorative memorial stone to where pedestrians can now see and read it. “The stone commemorates the 50th anniversary of a train crash that happened at Berala station in 1952, and we brought the stone back into the public space to honour it and give it presence,” says DesignInc Associate Megan Walker. New interchange facilities, such as sheltered bike racks, accessible parking spaces and kiss and ride zones also now ease the commuter journey.

Inside the underpass, it opens to a natural light-filled void with stairs to one side and the new elevator (accommodating 17 people) to the other. The new brickwork is the same heritage bond as the original, creating the appearance that the new addition has always been there. 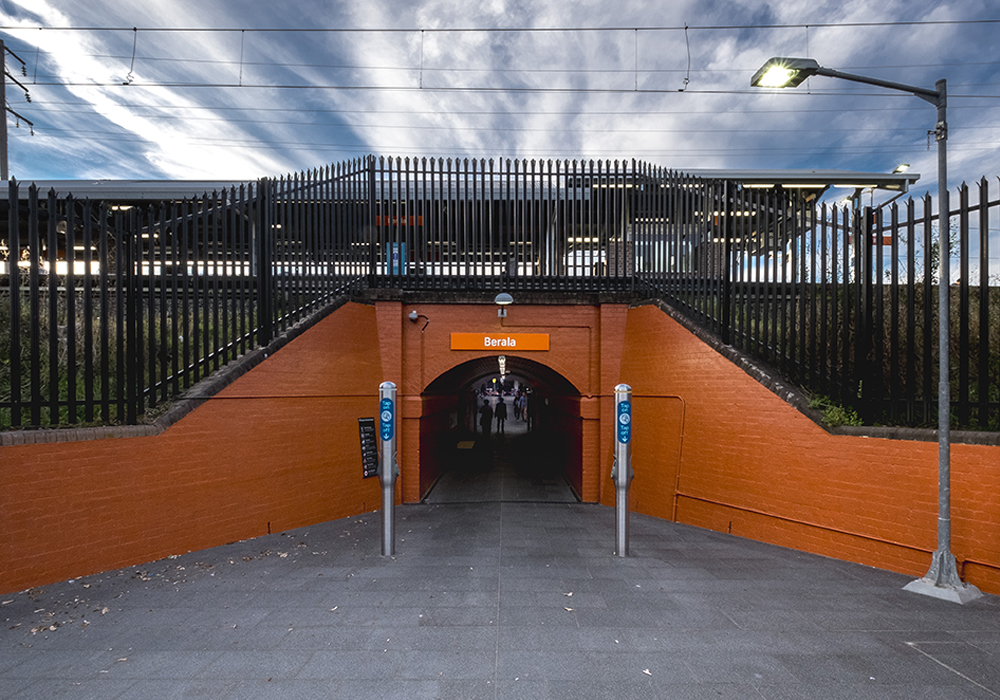 On the station platform, the glass elevator shaft is housed within low-level decorative face brickwork to match the brick finish of the underpass, stairwell piers and coping edges. “TNSW’s heritage department and urban design precinct team loved the outcome because it looks like it always been there,” Megan explains. “It’s been inserted in 2017, but done in a way that feels like it’s original.”

The elevator shaft sits under a new section of the steel-framed and metal sheet-roofed platform canopy. It has the same form and pitch as that extending over the heritage-listed 1920s weatherboard station building, in which the rafters stretch over the platform to become an awning. 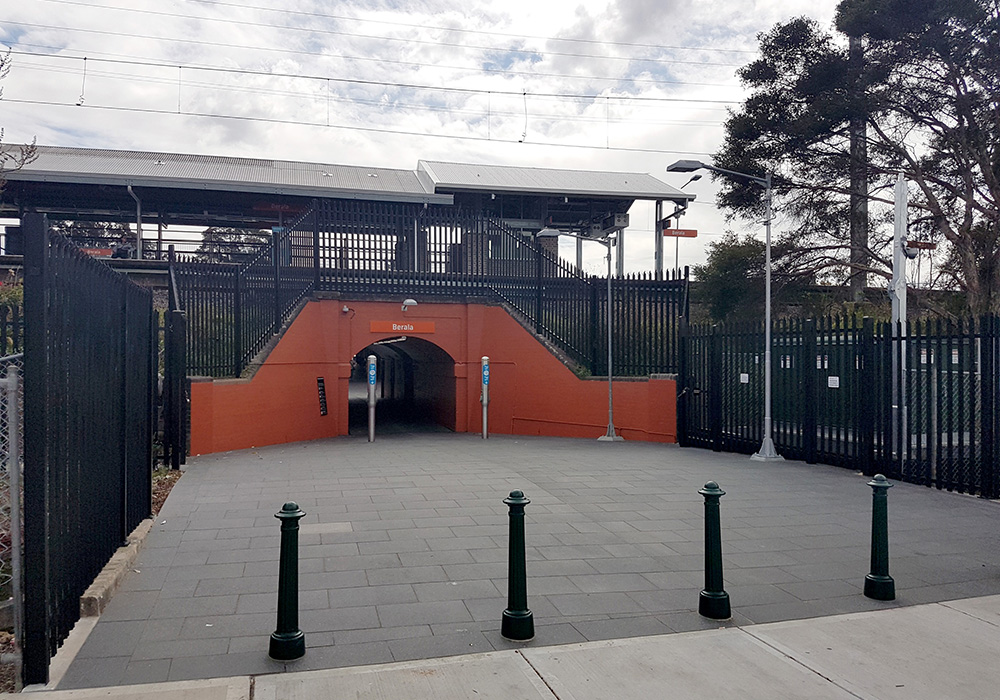 DesignInc refurbished this original station building, which had been relegated to storage space over the years, to include a family accessible toilet, unisex ambulant toilet, staff facilities and an upgraded Communications Room. During the process, the project team came across evidence and artefacts of the station’s history including a ticket window; original mouldings; hand stencilling; and old ticket stubs. Keeping as much of the building as possible in tact, DesignInc reinstated the ticket window, refurbished the original ticket counter and doors, and placed original bench seats in the waiting room where they can be viewed through the gate, although not accessed. “We moved things around but did so in a sensitive way as we inserted new functions and heritage interpretations,” says Megan.

All construction at Berala railway station was carried out on a live, running station; it was closed only on weekends when necessary in order to cause as little disruption to commuters as possible.