HRM magazine is the Australian HR Institute’s flagship publication, helping HR professionals make an effective contribution to their organisation. DesignInc is proud to feature in the September 2018 issue of HRM, in which Nicola Heath discusses how DesignInc is actively challenging the gender imbalance in the male-dominated architecture industry. By creating a culture that promotes diversity and equality, encourages female leadership and supports out-of-hours commitments, DesignInc has achieved a 51:49 female to male ratio, with women making up 45 per cent of principal and associate roles. 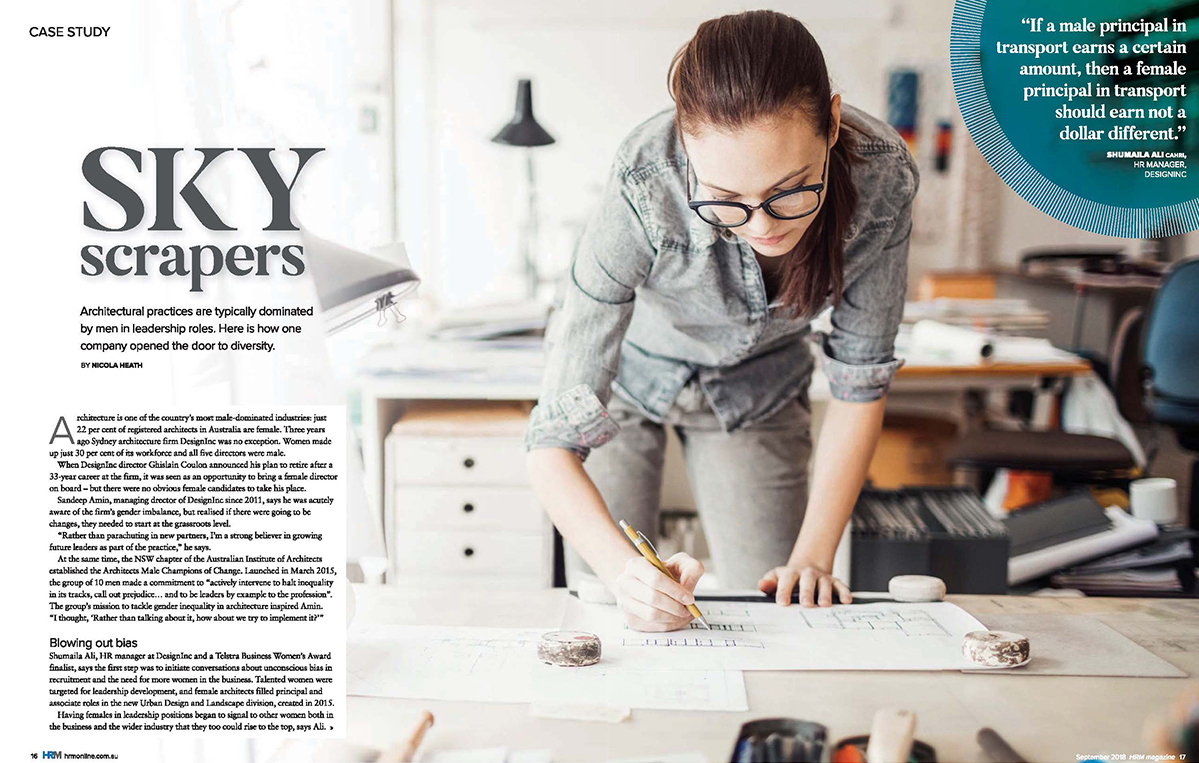 Architectural practices are typically dominated by men in leadership roles. Here is how one company opened the door to diversity.

Architecture is one of the country’s most male-dominated industries: just 22 per cent of registered architects in Australia are female. Three years ago Sydney architecture firm DesignInc was no exception. Women made up just 30 per cent of its workforce and all five directors were male.

When DesignInc director Ghislain Coulon announced his plan to retire after a 33-year career at the firm, it was seen as an opportunity to bring a female director on board – but there were no obvious female candidates to take his place.

Sandeep Amin, managing director of DesignInc since 2011, says he was acutely aware of the firm’s gender imbalance, but realised if there were going to be changes, they needed to start at the grassroots level.

“Rather than parachuting in new partners, I’m a strong believe in growing future leaders as part of the practice,” he says.

At the same time, the NSW chapter of the Australian Institute of Architects established the Architects Male Champions of Change. Launched in March 2015, the group of 10 men made a commitment to “actively intervene to halt inequality in its tracks, call out prejudice… and to be leaders by example to the profession.” The group’s mission to tackle gender inequality in architecture inspired Amin.

“I thought, ‘Rather than talking about it, how about we try to implement it?’”

Shumaila Ali, HR manager at DesignInc and a Telstra Business Women’s Award finalist, says the first step was to initiate conversations about unconscious bias in recruitment and the need for more women in the business. Talented women were targeted for leadership development, and female architects filled principal and associate roles in the new Urban Design and Landscape division, created in 2015.

Having females in the leadership positions began to signal to other women both in the business and the wider industry that they too could rise to the top, says Ali.

“We started getting a lot applications from female graduate architects for other roles because they saw they could climb the ranks.”

Results were rapid. By 2016, the gender split across all roles was 51 per cent female, 49 per cent male. And the leadership pipeline had become more equitable too. In 2018, women make up 45 per cent of principal and associate roles.
“I’m proud that this year we’ve been able to bring parity across the board,” says Ali. “If a male principal in transport earns a certain amount, then a female principal in transport should earn not a dollar different.”

The introduction of a core hours policy addressed architecture’s notorious ‘always available’ culture and gave staff more flexibility to structure their work day to fit their out-of-hours commitments. Staff can adjust their start and finish times around the core hours of 9.30am to 4pm. Meetings and events must be scheduled between these times too.

The initiative accommodates those with caring responsibilities, allowing parents to start and leave early to pick up their children from day care. But it’s not only parents. “There are people who go surfing every morning – they can also start and finish late. Some people work better in the morning, others are more effective in the evening. It’s beneficial to many.” 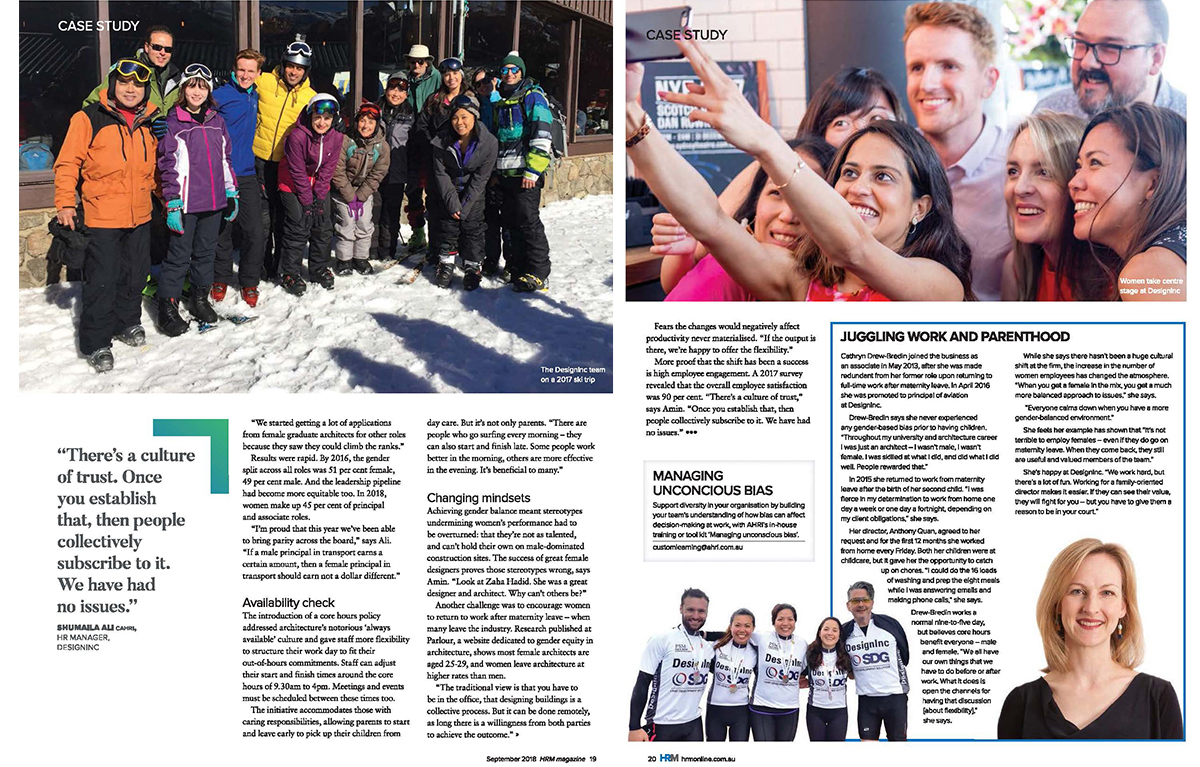 Achieving gender balance meant stereotypes undermining women’s performance had to be overturned: that they’re not as talented, and can’t hold their own on male-dominated construction sites. The success of great female designers proves those stereotypes wrong, says Amin. “Look at Zaha Hadid. She was a great designer and architect. Why can’t others be?”

Another challenge was to encourage women to return to work after maternity leave – when many leave the industry. Research published at Parlour, a website dedicated to gender equity in architecture, shows most female architects are aged 25–29, and women leave architecture at higher rates than men.

“The traditional view is that you have to be in the office, that designing buildings is a collective process. But it can be done remotely, as long as there is a willingness from both parties to achieve the outcome.”

Fears the changes would negatively affect productivity never materialised. “If the output Is there, we’re happy to offer the flexibility.”

More proof that the shift has been a success is a high employee engagement. A 2017 survey revealed that the overall employee satisfaction was 90 per cent. “There’s a culture of trust,” says Amin. “Once you establish that, then people collectively subscribe to it. We have had no issues.”

Cathryn Drew-Bredin joined the business as an associate in May 2013, after she was made redundant from her former role upon returning to full-time work after maternity leave. In April 2016 she was promoted to principal of aviation at DesignInc.

Drew-Bredin says she never experienced any gender-based bias prior to having children. “Throughout my university and architecture career I was just an architect – I wasn’t male, I wasn’t female. I was skilled at what I did, and did what I did well. People rewarded that.”

In 2015 she returned to work from maternity leave after the birth of her second child. “I was fierce in my determination to work from home one day a week or one day a fortnight, depending on my client obligations,” she says.

Her director, Anthony Quan, agreed to her request and for the first 12 months she worked from home every Friday. Both her children were at childcare, but it gave her the opportunity to catch up on chores. “I could the 16 loads of washing and prep the eight meals while I was answering emails and making phone calls,” she says.

Drew-Bredin works a normal nine-to-five day, but believes core hours benefit everyone – male and female. “We all have our own things to do before or after work. What is does is open the channels for having that discussion [about flexibility],” she says.

While she says there hasn’t been a huge cultural shift at the firm, the increase in the number of women employees has changed the atmosphere. “When you a get a female in the mix, you get a much more balanced approach to issues,” she says.
“Everyone calms down when you have a more gender-balanced environment.”

She feels her example has shown that “it’s not terrible to employ females – even if they do go on maternity leave. When they come back, they still are useful and valued members of the team.”

She’s happy at DesignInc. “We work hard, but there’s a lot of fun. Working for a family-oriented director makes it easier. If they can see their value, they will fight for you – but have to give them a reason to be in your court.”

You can read more stories from HRM Magazine here