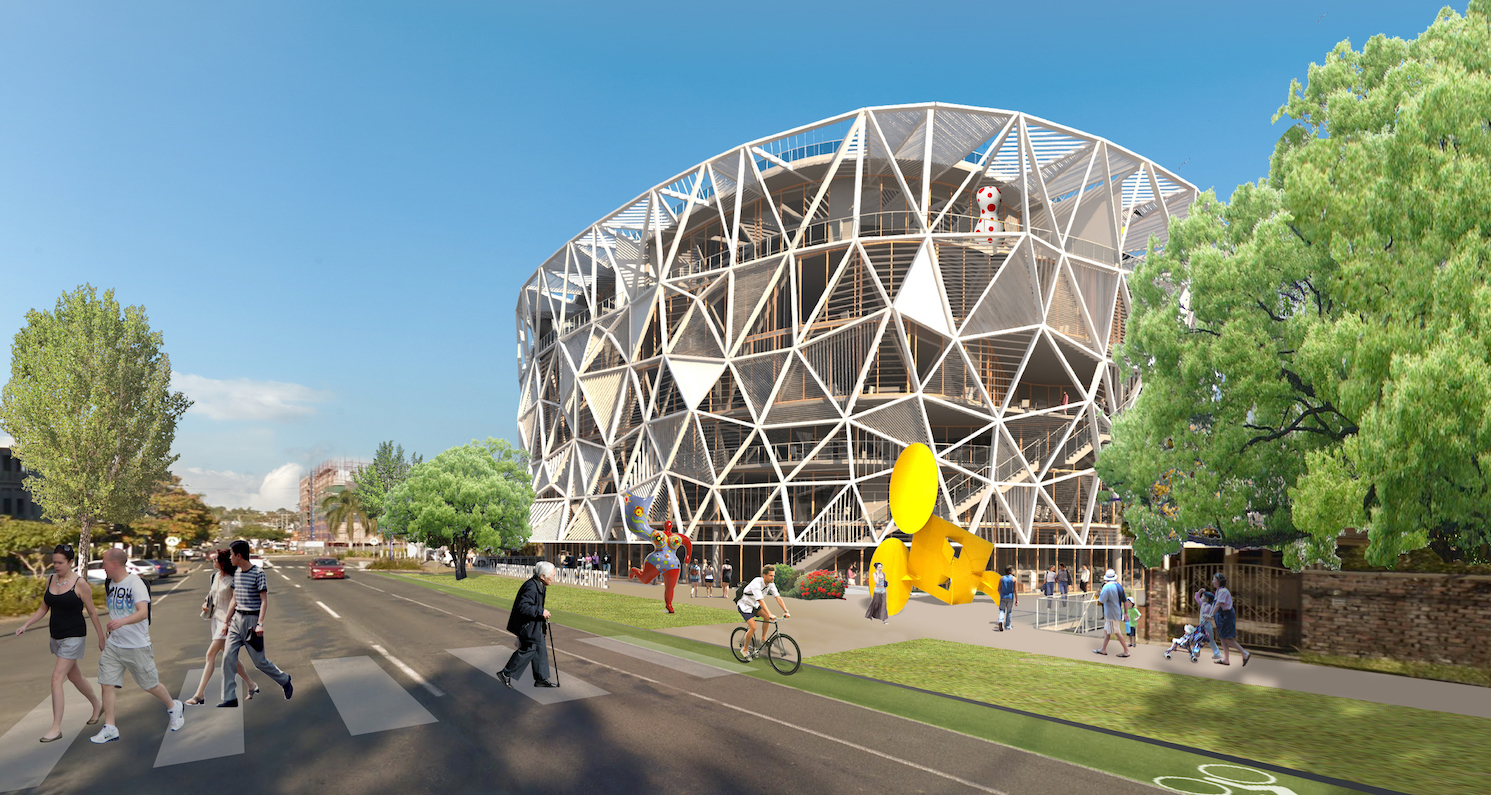 Well-designed city centres are drawcards for locals and visitors and can help drive economic activity through retail, commercial, cultural and civic developments. In June 2016, Coffs Harbour City Council initiated a concept development project for a new cultural and civic space in the heart of Coffs Harbour. The Council introduced the project as a competition and DesignInc collaborated with Lacoste + Stevenson on a concept design that was selected as one of three for public comments and stakeholder presentations. 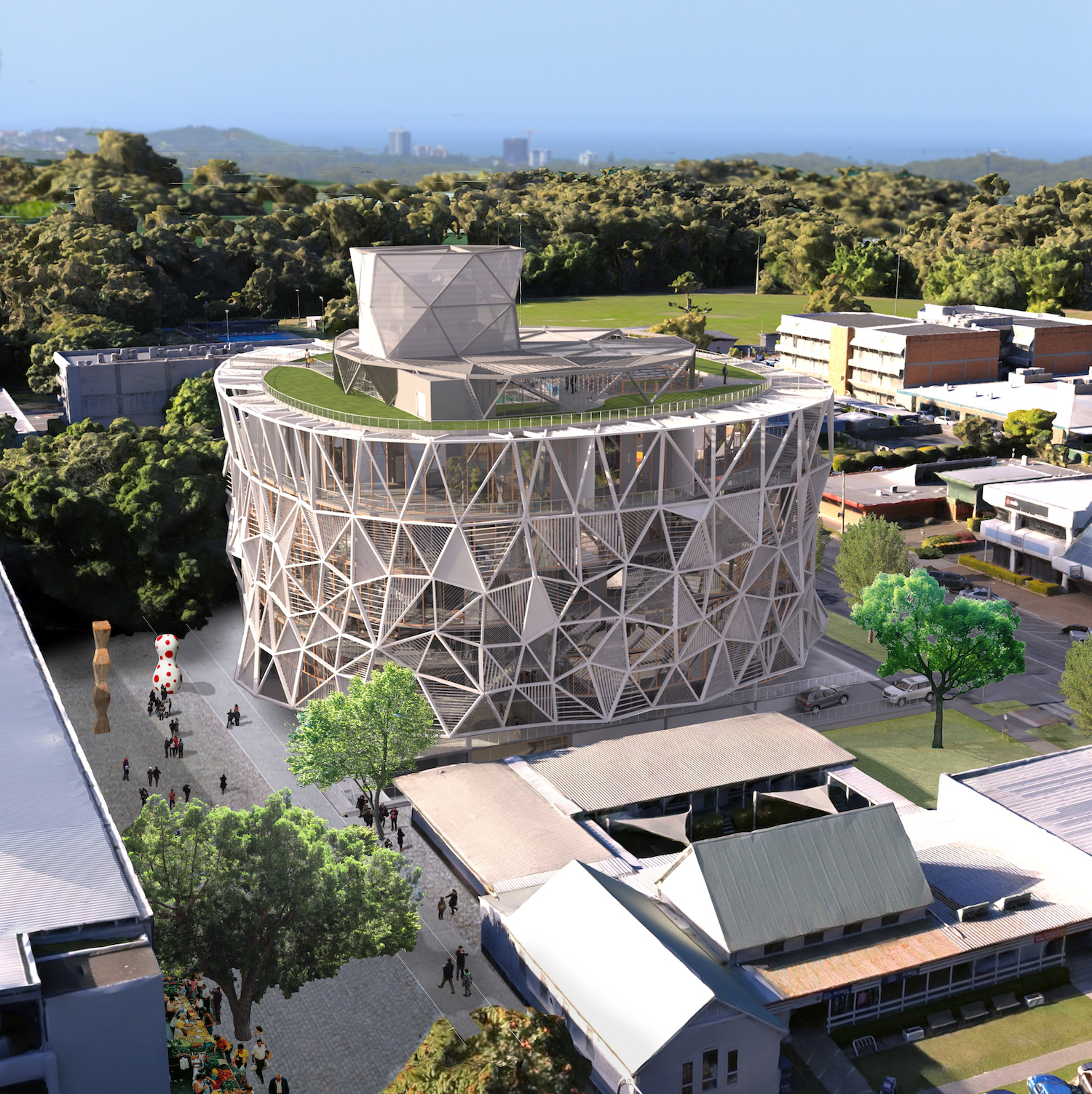 The new building and surrounding space is intended to draw people into the Coffs Harbour CBD, helping to activate the city centre as a community and visitor destination. Being inclusive of the Coffs Harbour population, it will incorporate a library, museum, gallery, youth area and digital media studio, exhibition space, workshops and makers studios, public art, parking, a café, small events space and technology resources. “This means people of all ages and backgrounds have a reason to visit. It will also incorporate best practice access and facilities for people with limited mobility and older people,” Cr Denise Knight, Mayor stated. 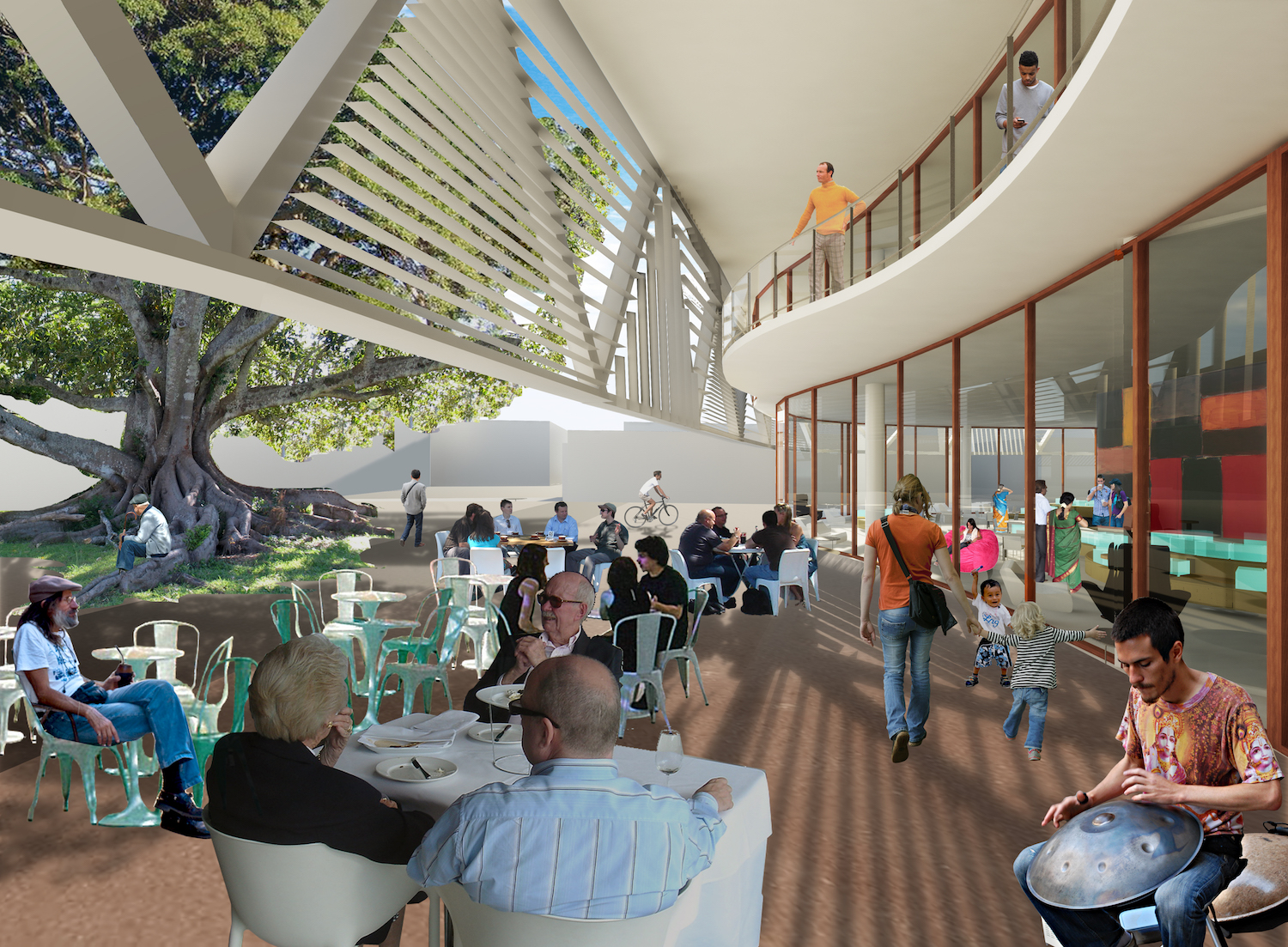 DesignInc and Lacoste + Stevenson have worked together on five buildings in recent years. The same team that delivered the Shellharbour Civic Centre and 5 Parramatta Square developed the Coffs Harbour concept design at the end of 2017. “We wanted the building to feel welcoming, casual and approachable, representative of the Coffs Harbour lifestyle,” said DesignInc Sydney Director Richard Does. “The plan is driven by a simple loose organic circular form, and the shape of the building allows pedestrian movement freely around the base. The elevation is an organic structure, woven around the floorplates to offer shade and views.” 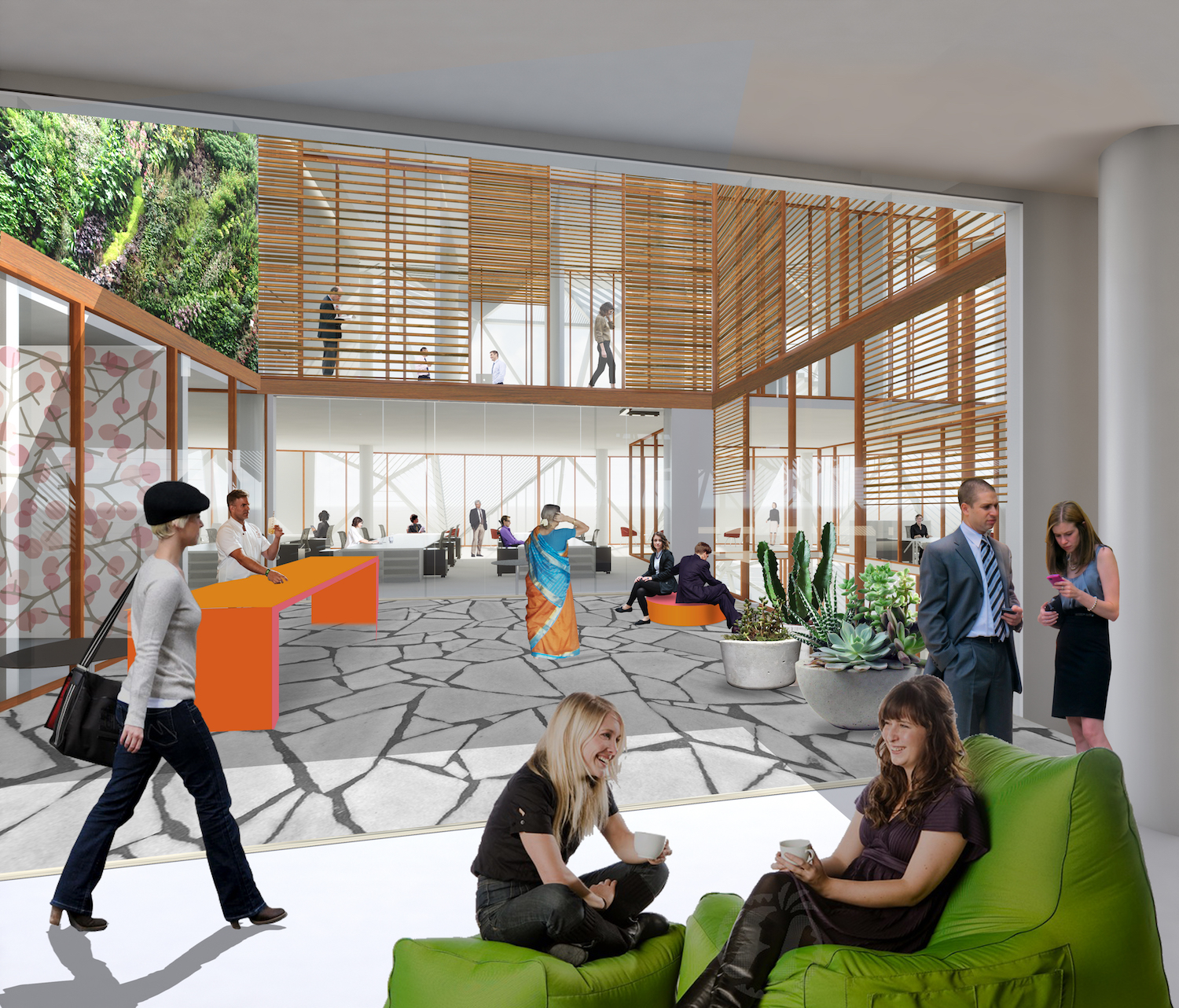 The organic-shaped building is designed in the round, with no apparent front or back, so as to attract people and allow access from all directions. A white, lace-like shell wrapping around the is inspired by the local Gumbaynggirr people and, more broadly, Aboriginal art. It is designed to draw intrigue and provide shade from the sun; the triangular forms protect the glass and timber façade from the environment while letting maximum daylight penetrate the interior.

A three-storey tower atop the six-storey building serves as a beacon that can be seen from Pacific Highway and the surrounding hills. It will be clad with white sails as a symbol of the city and illuminated at night with projected images that can be curated to announce public events and community programs. 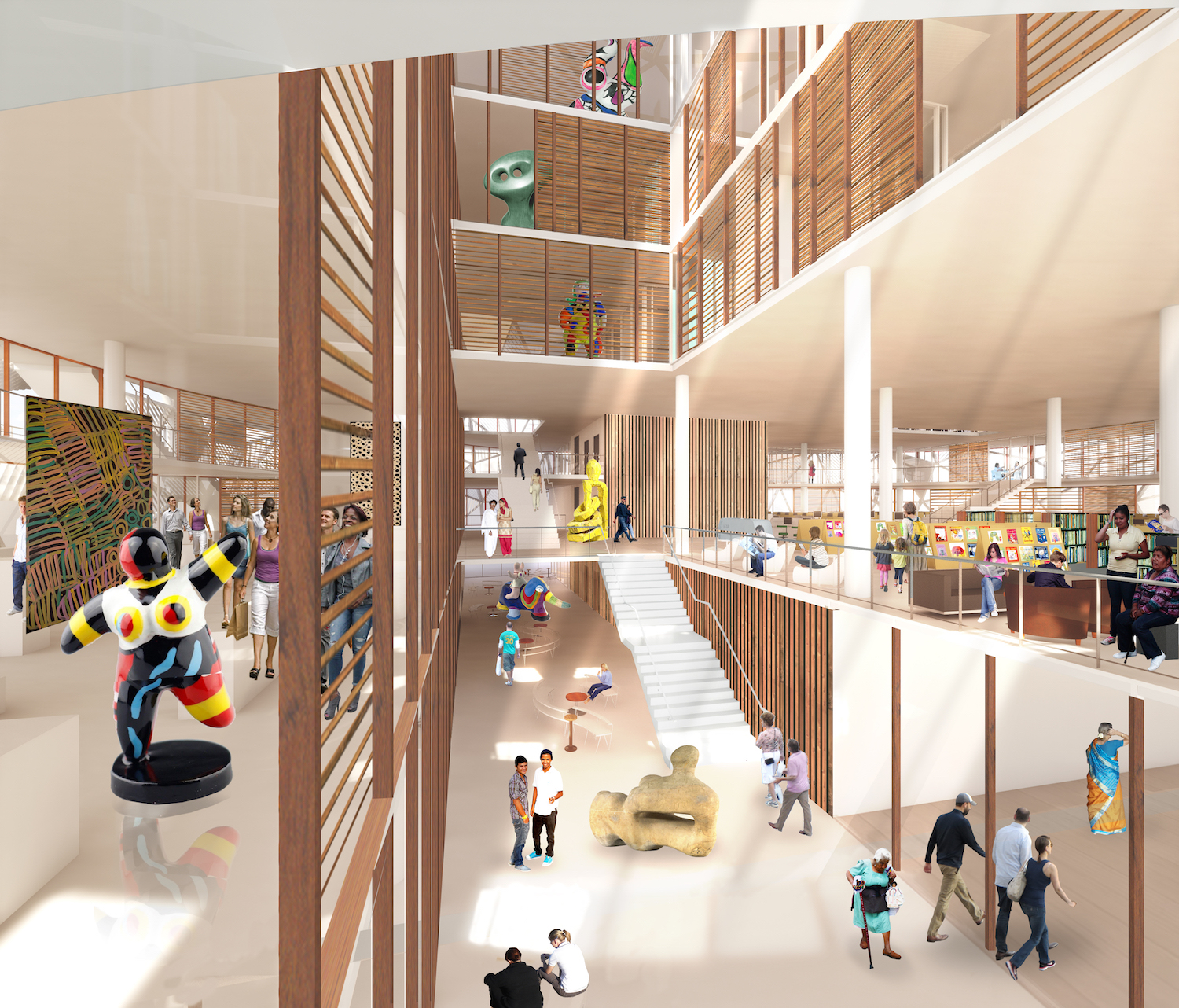 Inside, a six-storey atrium allows views up to the roof gardens and creates an internal link through the building. Large flexible floorplates cater for the required functions of the centre and accessibility fosters social interaction. The floorplates can be easily modified for future needs and uses and provide large areas of thermal mass that will help keep the building cool without the need for air conditioning.

The building is configured with the library and council services on the ground floor where they are easily accessible. The library spreads across levels one and two, with the museum and gallery also on level one. Council chambers, office and co-working spaces are across levels three, four and five. This fifth floor also has a large gallery space that opens to a terrace around the building that can be used for sculpture display and offers district and ocean views. Additional gallery spaces on the lower floors of the atrium invite the public to the upper levels, and a roof garden on top of the building can be used for public and private functions. It includes an amphitheatre and can be used for outdoor cinema, weddings, seminar, receptions and other civic and non-civic events. A two-level carpark is in the basement. 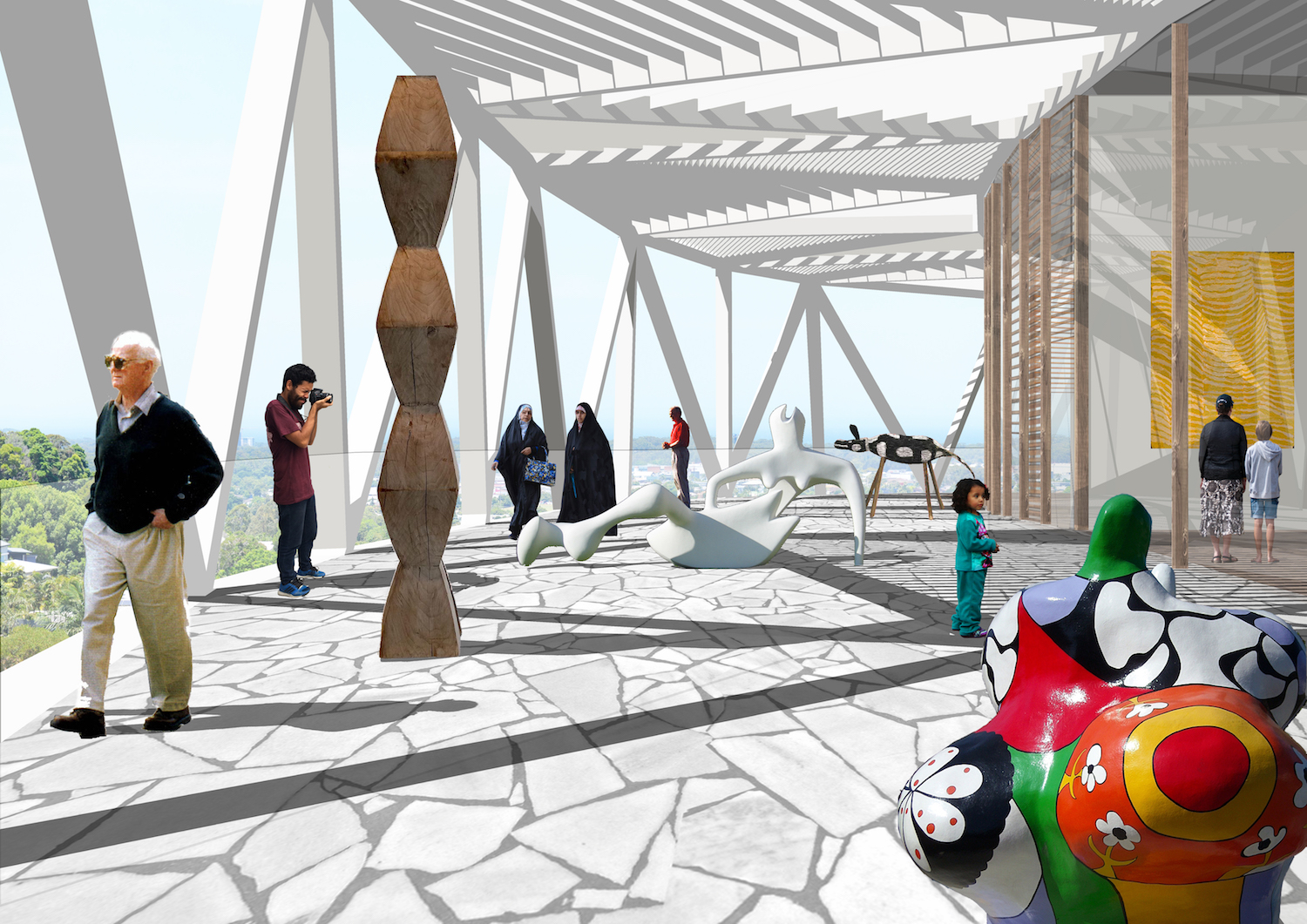 “We really love the outcome and this design has a curiously inviting presence on the street,” Richard said. “The building will be an iconic landmark and a hub of learning and sharing with the library, council facilities, gallery and museum bringing a civic and cultural focus to the city centre.”
Coffs Harbour residents had the opportunity to provide feedback on the three shortlisted projects and hundreds of locals filled in the online survey and participated in focus groups. Council will now review the feedback and consider the options and recommendations, distilling the choices into a brief for a new, detailed design that will also engage community input.